A School for Creative, Outside-the-Box Thinking

Ever wonder what people who changed the world, no matter in which area, have in common? What unites Elon Musk, Bill Gates, Jeff Bezos, or the Israeli entrepreneurs who invented flash memory, drip irrigation, or Waze? They all share a spark, a special talent to see things differently, to look at a problem and see a solution many others could not. They are all risk takers, and not just with money: They were willing to go against the curve, to challenge rules and conventions, and never to accept "but we can't do that" or "these are the rules" or even "there's no precedent for that" as answers. Where something did not exist, they created it. When they thought a technology did not work well enough, they improved it. That is creative thinking. That's what we are here for.

No matter where you end up after college, you will face problems that have no easy solution. Jewish Studies can train you to think creatively, to see that off-the-wall idea, to take a new approach, to take risks, and propose and implement that solution that seems so crazy it just might work. This is what successful entrepreneurs and leaders, in any profession, do; they make it happen and turn the impossible into possible. Before the Israeli startup Waze came onto the navigation scene, there were two options when you encountered traffic. You could wait patiently until you reached your destination, or ignore the line and cut in front of someone. The people behind Waze believed there was a third way: Figure out where the traffic is worst and navigate around it through a creative, easy to access, crowd-sourcing app. Waze revolutionized navigation and in 2013 was bought by Google for $966 million.

Here in Jewish Studies we believe many of us have that spark, that ability to look at reality from different angles. We know changing the world is not limited to business or technology. You can be an educator or an artist and invent a new approach that would dramatically transform the work of others in your area. The opportunities are endless. We are not here to teach you a profession. We are here to help you become the person who changes the world in your profession. Majoring with us will be the best investment you have ever made in your future.

No One Does Unconventional Better than Us.

The Jewish Studies Program has a long track record of being special and different, on campus and nationally. We teach differently. We are involved in myriad research projects. We introduce students to the Israeli innovative state of mind through our Arnold Center for Israel Studies. We bring in substantial grant funds per year. We have a robust community support network that is eager to engage students. We run a major student life operation, the only academic program to do that at CofC, and the only Jewish one in the country. We serve thousands of meals per year. We bring 20-30 guest speakers and performers to Charleston every year. And our professors and staff have an approach to college that challenges and defies norms and conventions every day.

The Best Second Major (and minor)

Jewish Studies is, above all else, a major that builds skills. It gives you the toolbox you will need to succeed in any career path you choose, and is therefore a wonderful addition to any major at the College of Charleston. Our major is among the most flexible ones you will find (mostly made up of electives). Our dedicated faculty will help you develop an armory of interpretative and analytical skills, such as writing, critical thinking, research, digitizing, global and intercultural fluency, creativity, problem solving, and public speaking – all identified repeatedly by employers as qualities they look for when hiring. 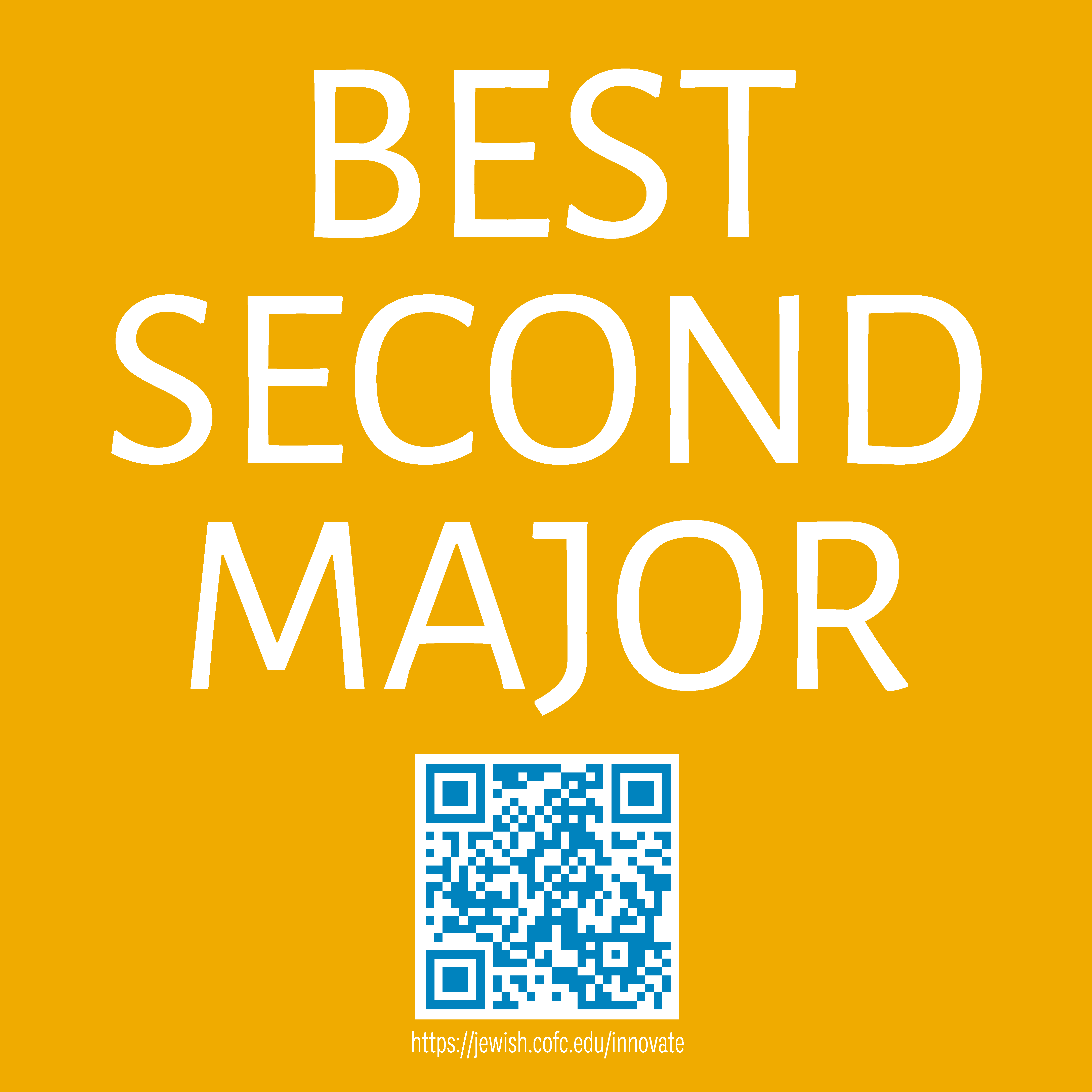 The Jewish Experience Matters Too

The Jewish Studies major enables students to understand the diversity and complexity of the Jewish experience. Students acquire a sophisticated understanding of the historical, religious, philosophical, literary, sociological, and linguistic components that constitute the Jewish experience. We believe the Jewish story, one of perseverance and struggle, also offers the best lessons in ingenuity, creativity, and adaptability.

Works with Almost Any Major

The Jewish Studies major is a wonderful addition to any curriculum. Our majors regularly pair Jewish Studies with such areas as business, political science, history, international studies, psychology, and education, to name but a few. Students may pursue the Jewish Studies Major with Hebrew, Arabic, German, and other languages with special permission.

The Jewish Studies Minor offers similar training, but in a more limited way. The minor is a wonderful addition to the curriculum of those students who are in heavy majors that do not leave time or credit hours for a second major; or for those who already pursue two majors or another minor.

Note: Students enrolled in JWST 210 and 215 (Jewish history survey sequence) for their history general education requirement should seriously consider a Jewish Studies minor. Those enrolled in Hebrew, German, or Arabic in addition to JWST 210 and 215 should seriously consider the Jewish Studies major, as those courses fulfill nearly half of the major.

For the Jewish Studies entry in the CofC catalog, see here.

Select one of the following options (also fulfills the College’s foreign language requirement):

Students wishing to complete the requirements for the Jewish Studies major while achieving proficiency in another language (not Hebrew, Arabic, or German) at the 202-level will require permission from the Director of the Jewish Studies Program.

Students placing out of any of the courses (101-202) in the Language through Culture requirement must still complete the minimum 36 credit hours in the program with Jewish Studies electives. For details, contact Program Director Dr. Ayalon at ayalony@cofc.edu.

Prerequisite: Junior rank or higher, 3 credit hours in JWST coursework below the 400-level or permission of the Jewish Studies Program Director. Course may be repeatable when the content varies.

There is one required course for the minor: JWST 210 Jewish History I: Ancient to Modern.

In addition, students will complete 5 electives from the list below.

Electives for the Jewish Studies Major/Minor:

ARBC 313 Conversation and Composition I**

GRMN 329 Current Issues in Germany or the German-Speaking World**

JWST 330 Representations of the Holocaust

POLS 324 Politics of the Middle East

* These courses must have specifically Jewish content to count towards the Jewish Studies major/minor.

* ARBC and GRMN electives are only available to students pursuing those languages as part of their major.

Hebrew has long been the language of the Jewish people. Spoken in biblical times, Hebrew was largely abandoned in favor of other vernaculars after the 6th century BCE. Since then, Hebrew was primarily used for prayer and Jewish religious scholarship.

Today, Hebrew is a living, spoken language. Revived in the 19th century, it became the main language of the State of Israel and is now spoken by over 9 million people around the world. After Israel, the United States has the second-largest Hebrew-speaking population. Hebrew connects Jewish people from all over the world, and as the language of the bible, is relevant to believers of other religions as well. Those who wish to read the bible in its original form, as well as those who wish to study it for its literary and historical value, will find studying Hebrew very useful. A knowledge of Hebrew is a primary tool for scholars interested in theology, and some linguistics too.

The College of Charleston currently offers four levels of Hebrew, from the 101 to the 202 level over the course of two years. Students who wish to study Hebrew as their college language requirement need to successfully complete level 202 or pass a placement test (more on that below). The Jewish Studies Program will offer 301 and 302 levels (third-year Hebrew) based on demand.

Completion of the four courses (101-202) will enable you to recognize the fundamental structures of Hebrew and its basic forms, and to acquire the necessary vocabulary for everyday conversations, reading, and writing on a limited scale. Comprehension: Listening to short stories and recorded conversations. Conversation: Simple dialogues and stories from everyday life. Reading: Easy dialogues and passages without vowels; headlines and simple, short texts in easy Hebrew. Writing: Short dialogues and passages on the topics taught in class. Grammatical skills: Elementary syntactic and grammatical structures, inflection of the strong verb in the past and present tenses; frequent weak verbs.

All four levels include exercises in speaking, hearing, reading, and writing. Students will speak in Hebrew to each other in class as well as work in pairs and groups. Students will use a workbook and a textbook, and read additional texts, listen to songs and audio clips, and watch videos in Hebrew. Once a semester, we will watch a movie in Hebrew (with English subtitles).

If you feel your Hebrew exceeds the 101 level and wish to register for a higher level, you must schedule a placement test to determine your level. The test includes reading comprehension, writing, listening, and speaking. Please note that currently 101 and 201 are only offered in the fall, and 102 and 202 are only offered in the spring. Please make sure to take the exam as soon as possible, preferably as soon as your first semester of freshman year. Failure to do so may result in having to wait a whole year to take the level of Hebrew appropriate for you. Placement exams for levels of Hebrew higher than 101 are administered by Keren Ayalon, Instructor of Hebrew.

If you feel your Hebrew is at the highest level and you should be exempted from Hebrew courses, you will need to take an external exam to determine your elegibility for such an exemption. The test is administered by an external company, and there is a cost to take it. In some instances, the Jewish Studies Program may offer to cover the cost of such an exam for you (this is guaranteed for Jewish Studies Minors and Majors). If you are exempt from Hebrew, you are still expected to take the equivalent number of credits in other electives (the exemption satisfies the College's language requirement, but does not provide credits). You may want to consider taking Hebrew level 301 and 302 if it is offered, or learn another foreign language.

Acquiring fluency in Hebrew, as in any other language, requires further study beyond the first two years. There are many opportunities to further your study of Hebrew, including at universities in Israel and in the United States. For more information, contact Program Director Dr. Yaron Ayalon.

Three centers of academic excellence operate under the auspices of the Yaschik/Arnold Jewish Studies Program:

The Zucker/Goldberg Center for Holocaust Studies

Our centers often cooperate with another sub-unit of our Program, the Jewish Historical Society of South Carolina 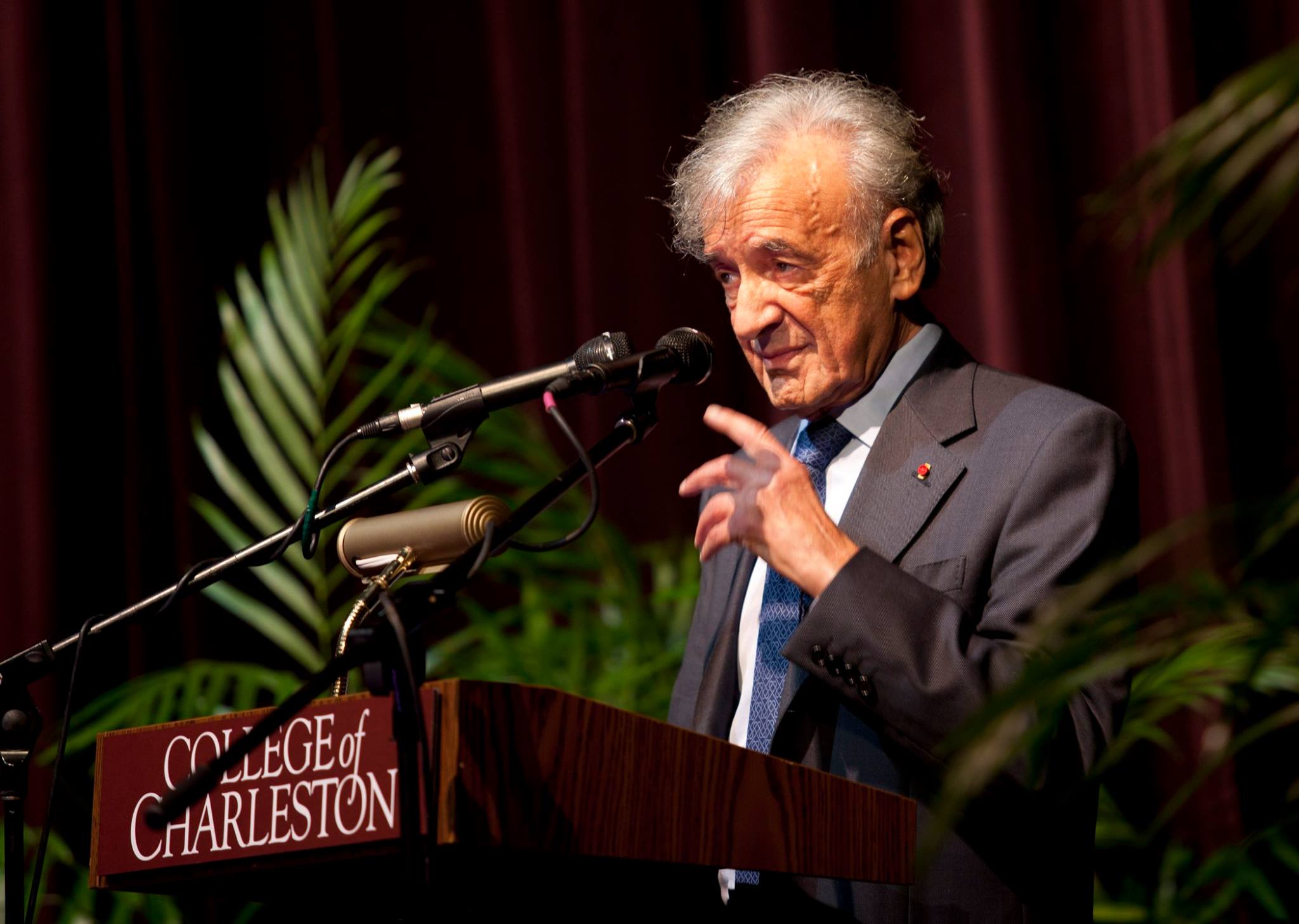 Note: The list here is outdated. For up-to-date info on courses, please visit this link and pick the relevant semester from the drop-down menu